How boring would writing be without descriptive phrases and adjectives? Sentences would be reduced to reading like elementary school primers. Authors make their works more interesting and vivid by using descriptive terms and phrases to enhance their prose and poetry.

This language used to describe objects, events, and people is called imagery. So what is imagery definition? Imagery is the use of language that engages the five senses: sight, hearing, smell, taste, and touch.

Imagery creates a more meaningful and efficient way to translate meaning and expression through the written word. As the saying goes, “a picture is worth a thousand words.”

In the case of imagery, the use of descriptive words and phrases provide the reader with a picture that he can use to better understand what is happening or to become more engrossed in a story.

Examples of imagery in poetry and literature

The dog walked outside and barked at the cat.

The sentence is boring and lacks a sense of life. The reader has no information to draw on to make the story more interesting or to create an accurate image in their head of what the author intended.

Adding a few descriptive words and phrases that engages one of the senses can help the reader to form a picture of the action in their minds, pulling them closer into the story and creating a better emotional connection to the narrative.

For example, the sentence could be rewritten as follows:

The tall and menacing black dog stalked outside in the cool rain and snarled at the fluffy cat.

The additions to the sentence evoke a visual, aural, and tactile response from the reader. In addition, by including a few descriptive words, the audience now has a better characterization of both the dog and the cat, knowing that the dog is large and mean, and that the cat is furry and soft.

The story is also given a setting that the reader can use as a backdrop for the action. The mood and tone of the sentences are completely different as well. The first sentence has a neutral tone and mood, while the second sentence has a more negative tone and a darker mood.

The second sentence also allows the readers to connect more with the cat and to sympathize with its situation in being chased by a large, ferocious dog.

If subjects and verbs are the meat of a paragraph, adjectives and descriptive phrases are the seasonings. Imagery helps to establish mood, place locations, and enhance characterization. In short, imagery makes writing more interesting and brings the audience into a story. 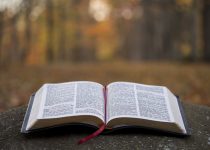